The Lauderhill Police Department has a crystal-clear message for those participating in criminal activity in the City of Lauderhill. That message is JUST DON’T…you will be caught!. The Lauderhill Police Department is currently engaged in several undercover operations so, criminals beware! We encourage our wonderful citizens to participate in the JUST DON’T …you will be caught! initiative and request when you “see something, say something”. Call the Lauderhill PD non-emergency line 954-764-4337 or Crime Stoppers at 954-493-8477(TIPS) and let’s send the message together. (If you have an emergency, please dial 911).

On February 18, 2019, Lauderhill Police responded to an incident involving a possible fentanyl (a.k.a. opioid) overdose where a victim was found unresponsive and lifeless.  Members of the Lauderhill Fire Department were able to revive the victim who ultimately survived the incident. An investigation into the incident led to the identification of Jack Hunter, the suspected fentanyl dealer.

By the end of February 2019, members of the Special Project Unit (SPU) had made several undercover fentanyl purchases from Hunter and on April 8, 2019 conducted a buy/bust operation.  During this operation, Jack Hunter (DOB 06/12/1979) was arrested for the following charges:

2 counts – Delivery of Fentanyl (a.k.a. opioid)

Jack Hunter is currently being held at the BSO jail without bond.

During our last article (below), we reported on March 25, 2019, members of the Special Project Unit (SPU) executed search warrants at two locations within the Hidden Forest Community, 2050 NW 43 Terrace #8 and 2070 NW 43 Terrace #4 and in both instances the suspects avoided arrests.

The suspect, for the first warrant, at 2050 NW 43 Terrace Apt. #8, where SPU detectives discovered marijuana being cultivated in a closet of the home, was identified as Roberto Hilman and arrested on April 4, 2019 for manufacturing cannabis.

The suspect, for the second warrant, of 2070 NW 43 Terrace #4, where SPU detectives located a trafficking amount of cocaine, two firearms, and various other narcotics, was identified as Quincy Adderly, a nine-time convicted felon.

On April 2, 2019, SPU detectives obtained an arrest warrant for Adderly and worked with the U.S. Marshals Service Fugitive Task Force to bring the suspect to justice.

On April 12, 2019, Adderly was located in Oakland Park, FL and arrested for the following charges:

As a result of this arrest, SPU detectives obtained a DNA warrant for Adderly’s DNA standard and swabs from the firearms located on March 25, 2019 and are being sent to DNA International for comparison.

Quincy Adderly is currently being held at the BSO jail with an $18,000 bond.

Just Don’t – You will be caught!

An anonymous caller provided information to detectives from the Special Projects Unit (SPU) about a “marijuana grow house” in the Hidden Forest community.  SPU detectives used this information to identify the suspected apartments and residents and made several covert marijuana purchases in the complex.  These purchases lead to the issuance of two search warrants and on March 25, 2019, where SPU detectives teamed with BSO SWAT to execute the search warrants.  The results are as follows: 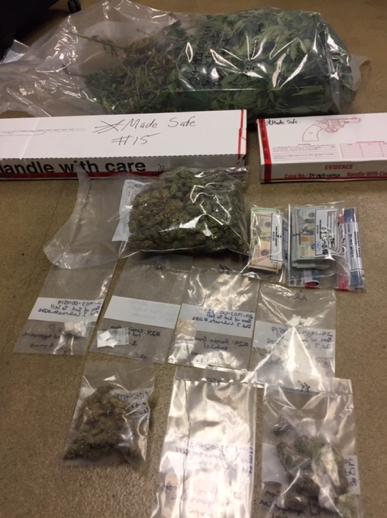